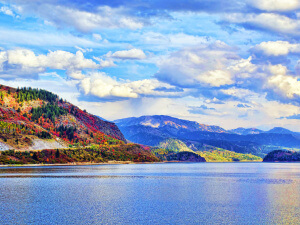 Lawrence K. Adams was born on February 2, 1953 in Arlington, VA to Mr. and Mrs. John H. Adams. He lived and worked as a locator and a chef in the DC area until moving to Wyoming to share his passion for cooking and to spend more time hiking, hunting, and snowmobiling in his beloved backyard, the Wyoming Range.

Lawrence met the love of his life, Ruth Cox, in Jackson and they married on February 24, 2007. Though they found each other late in life they felt blessed to have crossed paths and found blessings in so many of the things they shared: a love of their many adoring pets, an appreciation for the neighbors and friends who became like family to them and gratitude for the opportunity to call Alpine home.  When not zipping around in his Polaris RZR with his chocolate Lab, Luger, as co-pilot, Lawrence could be found at the Alpine library reading, choosing a film to watch or otherwise indulging his great sense of curiosity in history, literature and the arts.

Lawrence’s family would like to extend a very special thanks to Access Hospice and especially nurse, Cheryl, Drs. Blake Wachter and Michael Pieper, the nursing staff at SVMC and the Alpine Fire/EMS team for their stellar and compassionate care and to all of the unwavering support that neighbors, clergy and friends have demonstrated in the last several days.

Lawrence was preceded in death by his parents. He is survived by his wife Ruth Cox Adams, his brother Bruce (Cheryl) in Alpine, sister Barb, sister-in-law Cheryl (Frank) McConnell in West Virginia, and nephews Dan (Irinia) in Alpine and Mike (Valerie) and son, Burke in Jackson.

A celebration of Lawrence’s life will be held at the Alpine Civic Center on Sunday, February 24 at 2pm. Blessings to all.